~ We are Diamonds, Diamonds are Stars, We Are Stars ~ 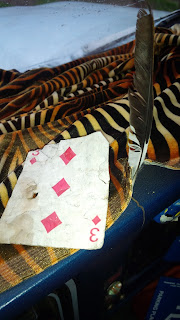 In 1994, the 3 of Diamonds began to stalk me.
It started when my quantum awareness was questioned in the form of a face down, playing card, in the gutter of a Hollywood Club I was about to do a show at. My boyfriend at the time, after we had already stepped over the card; stops and challenges me to intuit, the card. I was like...really?
No problem: 3 of Diamonds...shut him up :)

That card was a message, although it took me decades to "crack the code", it has continued to randomly present itself to me, sometimes in the strangest places...I knew it was a piece to the puzzle, and today, these many pieces; some of which I have been holding for decades; have gifted me with the ear to hear their song. I am grateful to receive, so that I may continue to transcieve.
This is how we open stargates. Stargates exist within all, once you have fully integrated and activated your 12 stand, crystalline D.N.A., thus "11" harmonic tying to the reunion of the Twin Souls. This unlocks inter-dimensional, triangulation, giving our species/humanity, it's next evolutionary leap in D.N.A. As the double helix then creates the new adaptation into triple helix. This is what the Trinity is!
shaman Wendi

Diamonds are a carbon-based, triangular prism, and considered the perfect octahedron.

"To achieve perfect symmetry between the vertices, it's clear that each face of a regular polyhedron must be a regular polygon, and all the faces must be identical. So, Theaetetus first considered what solids could be constructed with only equilateral triangle faces. If only two triangles meet at a vertex, they must obviously be co-planar, so to make a solid we must have at least three triangles meeting at each vertex. Obviously when we have arranged three equilateral triangles in this way, their bases form another equilateral triangle, so we have a completely symmetrical solid figure with four faces, called the tetrahedron."

Platonic Solids and Plato's Theory of Everything

Diamonds Are From Space Science Article

144 is the 12th Fibonacci sequence.
144 is linked to the Tetragrammaton - see Nasim Harrimein:

"Now it is well known that Pythagoras was a superhuman (‘godly’) figure secretly rumored to be able to travel in Space/Time, taught by Hermes and sent to 3D Earth to help mankind; in other words Pythagoras is the real link between ancient Egypt of the Pyramids as leftover of Atlantis and the following devolved surviving civilizations in our occidental world, as far as knowledge concerns. This is why for ex within Masonic circles Pythagoras is regarded as an archetype of ‘Jesus’ within the “LOGOS & NOUS” secret knowledge; the utter caricature that this distinction has been turned into by the current academic establishment is a testament  to the interdiction of all science and knowledge of crucial matters in our current civilization. I suggest you rather start thinking of the NOUS as akin to your Personal Computer and of the LOGOS as akin to the Worldwide Internet, to better grasp what they were trying to convey when using these terms."

Mystery of the Tetragrammaton

Diamonds carry the highest "white light" dispersion through a prism, allowing for the separation of the spectrum of colors, which in turn, aligns with our chakra system.

"Light changes speed as it moves from one medium to another (for example, from air into the glass of the prism). This speed change causes the light to be refracted and to enter the new medium at a different angle (Huygens principle). The degree of bending of the light's path depends on the angle that the incident beam of light makes with the surface, and on the ratio between the refractive indices of the two media (Snell's law). The refractive index of many materials (such as glass) varies with the wavelength or color of the light used, a phenomenon known as dispersion. This causes light of different colors to be refracted differently and to leave the prism at different angles, creating an effect similar to a rainbow. This can be used to separate a beam of white light into its constituent spectrum of colors. Prisms will generally disperse light over a much larger frequency bandwidth than diffraction gratings, making them useful for broad-spectrum spectroscopy. Furthermore, prisms do not suffer from complications arising from overlapping spectral orders, which all gratings have.
Prisms are sometimes used for the internal reflection at the surfaces rather than for dispersion. If light inside the prism hits one of the surfaces at a sufficiently steep angle, total internal reflection occurs and all of the light is reflected. This makes a prism a useful substitute for a mirror in some situations."

Everything in the Codex of this Matrix; all the Hieroglyphics, Glyphs, and Pictograms from all the world's ancient cultures, point to our Human Origins as being connected to the Star System of Triangulum. Damon T. Berry has done an incredible job in his connecting the dots (The dramatic tone aside).