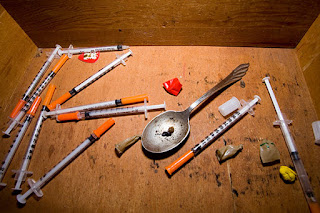 Apparently, there is a huge surge again, towards heroin addiction....WHY?

First of all, these cycles of addiction are directly related to societal downward trends. Whenever anarchy rears it's head, so does heroin addiction. Is this a coincidence or conspiracy?

From what I can empath, Heroin is like the most placid, embryonic state of consciousness you can experience. Being a musician, I unfortunately have had first hand analysis due to bandmates with habits. (I also have cellular memory from a past life as a heroin addicted black blues singer who was owned by the mafia. )
While it is euphoric, it is also soul destroying.

Here is my first hand experience, watching people you love, destroy their lives with heroin.

My guitarist, who was a very classy and elegant guy; Canadian, with manners and respect.
He had an amazing apartment in a very artsy neighborhood in L.A.; furnished quite tastefully with vintage furniture; he drove a fabulous classic Mercedes and he was my best friend. We wrote some incredible songs together!

One day he starts smoking heroin. I was taken aback but he assured me he would only smoke it; he would never shoot up. He offered me some, and even though it looked like a very serene experience, NO WAY was I going to do heroin! I had already managed to get through the cocaine era without ever so much as trying it. I did try Ecstasy twice but it did not affect me what-so-ever, but heroin was an entirely different beast, because heroin is for keeps!
Only second to meth/crack cocaine, heroin is a nearly impossible addiction to break, and anyone who thinks they're just going to smoke it is fooling themselves!

Sure enough it wasn't long before this incredible musician and artist, was shooting up. It consumed his every waking moment; waiting to get paid from his great job as a sound tech at one of L.A.'s most notable rock club's on the Sunset Strip, getting his dealer on the phone, driving to pick up, driving back to shoot up, prepping the shot, and....ta da...the actual shooting up. Always behind closed doors! Next would come a short window to create and then...the nodding off into la la land while your band is left dead in the water.

Pretty soon he lost his job; then little by little, pawned all his equipment for drug money; lost his apartment and now it was time for rehab. Being from Canada, where they offered socialized medicine, he went home for treatment services. He got clean, met a young local bassist and they started working on songs. The plan was for the two of them to drive back down to L.A., we'd rent a big house in Echo Park where we could also rehearse, and we would be able to get back into the stream as quickly as possible. We had been garnering a lot of industry attention so his "set-back" was certainly not convenient, but we were working through it.

They arrive on what was my birthday, and I had planned a small birthday/welcome back gathering at my cottage. That morning I waited with anticipation for the boyz to arrive! They had been driving for days in an old Studebaker full of their equipment and belongings so I just wanted them to arrive in one piece. Also, I had such an amazing creative connection with him, so I was very happy to be working together again. The boyz had sent me a demo of music for several songs they had written, and I had crafted, what I considered to be some of the best songs I had written to date, from their offerings, so it was an exciting time indeed!

After they arrived and got settled, my guitarist asks to borrow my car to run "an errand" BTW, that is code for "I am going to score some drugs"; however, I was in trust, and believing he would do such a thing, never entered my mind, not after all he'd lost and been through to get back here...right?
Since I was busy getting the food ready, I gave him the keys.

The young bassist he brought with him was exactly that! He was 21; a sweet and beautiful boy whose mother was both excited but reluctant to let him go with my guitarist to L.A.. but she wanted her boy to follow his dream and gift, as he was a fantastic songwriter and player! (I wrote my song "Amethyst" with him. I felt very responsible for this young man, he became like a kid brother. )
So he and I stayed at the cottage getting ready; soon people began arriving. I lost track of when my guitarist got back; he greeted people, and out of the corner of my eye, I saw him go upstairs to my bedroom.

There were a lot of people, I was pleased, and enjoying a nice glass of red wine; jumping into conversation after conversation as I milled about amongst the tribe. Some time later I heard a loud thump overhead. I remembered that I had seen my guitarist go upstairs; I finished out the conversation I was into and excused myself to go upstairs. As I walked into my bedroom, I did not see my guitarist, my eyes darted through the room; I saw some items knocked down onto the floor, and as my eyes followed that trail, I now began to see a lifeless body back behind my bed. I ran over to see my friend with his face blue, a needle stuck in his vein, and a sock tied around his arm.

I have a very loud voice so when I screamed, everyone came running up the stairs.

I yelled to call 911, as I pulled the needle out of his arm, along with untying the sock; I pulled him out from behind the bed, and out onto the floor. By this time, my neighbor, who was actually a "muse" of Jim Morrison's back in the day (another famous heroin abuser); was the first to get to me. We are both shaman, so we began to run energy over him. We had to breathe for him, so we took turns giving him mouth to mouth, and in between every breath, I screamed at him, trying to piss him off: He who was so concerned with how things looked; he who was so elegant, intelligent, creative and beautiful...reduced to a Bue Death Cold? The struggle going on spiritually, was palpable; soon the paramedics arrived, shot him with Naloxone and poof, he was fine....what? He awoke with quite a drama surrounding him, which was not his style. Poor young bassist was incredibly disappointed in mentor guitarist; I'll never forget the look in his eyes when he was initiated to go along in the ambulance with him to the hospital; some other friends followed in their car, and brought them all back a bit later, while I closed down the "celebration".

When they returned from the hospital, and we were alone, he was pissed at me, saying I humiliated him; I screamed at him, at the top of my lungs, that he was dead and I brought him back to life; where was his gratitude; where was a concern of what we all had to go through because of his asinine choice! Oh yeah, ...and Happy Birthday to Me!

The next morning, I wrote that song "Blue Death Cold", which can be heard on the soundtracks of both Pat Verducci's "True Crime" and "Embrace of the Vampire" with Alyssa Milano. Another song "My Affliction" was written from the early tracks the boyz sent; an attempt on my part, to embody his experience in an effort to interpret his internal struggle.

OK, he stumbled; albeit his first day back, but hey, creativity abounds...

We got the house in Echo Park, we went into the studio and recorded an incredible demo which later became my indie album "In the Garden of Ego".

A year later and naturally to be expected, said guitarist was hooked again, and we all went our separate ways.
I later learned the bassist, whose mother I swore to that I would watch out for her son in the vampiristic streets of L.A., became addicted to heroin and hung himself...

"We are the Architects of a New Reality!"
Posted by OrangeRay3 at 7:14 AM No comments: