So here we are, 2012...WOW! I never thought we'd actually make it this far back in 2001, because I'd been hyper aware of the energy build up to 911 and have had prophetic imagery available to me since childhood; I've been surprised at the great lengths that have been perpetrated since then, to keep humanity locked in a hyper vigilant paradigm that only serves TPTB and NOT...let me repeat myself for fear of NOT being heard...NOT the Creator. "Wag the Dog" tactics in play, keeping the origin of humanity and the human history, from the humans! This my friends, is the great showdown: battle of light and dark...fighting EACH OTHER...over who is right/wrong, dark/light, good/bad, black/white...this IS duality gridlock! All is inverted at this time, making DISCERNMENT imperative to your survival!!!
There is no time left for pretense, we must grow up spiritually and take responsibility for our OWN MINDS! When you stop thinking; when you stop feeling, you've lost your connection to the creative force that guides our inner compass. With such an intensely intricate, institutionalize system to control the reality, many have never even bothered to stop, look and listen except in a high school football cheer.
Think about this: banks and credit card companies are govt. insured, so if you default they'll still get their $. Thus when they sell your defaulted loan to the "bounty hunters", they make a profit and then the bounty hunter, with their mafia style tactics, terrorize you till you cough up blood. But it was initially paid off so the rest is just terrorism.
Another misnomer is that we are a Christian Country...oh really? Then why are all the Capitol buildings, street systems, statues and such, in dedication to Lucifer or depict pentagrams; heck just google the Denver International Airport. So what is this all about?

Perhaps the best way for me to start is from this channeling that came to me through automatic writing back in Dec.of 1990:
"People understand that there exists no entity that you refer to as the "devil". Darkness, as you will, lives and breathes and festers, within the hearts of those who've lost faith. It is within this unwillingness to acknowledge truth, that keeps man rooted in fear and thus in darkness. Even for those who've been sent to show you the light, they too lived in much darkness but because these warriors have been strengthen by their open willingness to overcome fear and seek truth, so they might fulfill their destiny and purpose, as examples to you and to themselves, they will endure your directed fear, so as to enlighten you for your soul's journey and thus their own, as with all mankind.
The planet will always exist, it is humanity that lies in jeopardy. You can die in fear or live in truth, which do you wish?"
At the time, I was like: "Cool" and I intellectually "understood" what was channeled but it wasn't until more recently that it came back into my mind and I was like: "I GET IT!". What I get is this: like a car battery, we have two polarities that work in tandem allowing us to function as a whole. As we are an electrical circuit thus energetic, it is a positive and negative circuit grid that we process from. So taking this concept and over laying upon the battle between light and dark, good or bad, black or white and you'll recognize
"the point"...We need them BOTH to operated in a 3D reality. To move into where we are evolving to however (5D), we need to rectify our relationship with these 2 polarities to enable us to embrace what the "trinity" or triality, intended which is the integration of these essential components, into a third position of neutrality, which allows us more acceptance and non-judgement by it's very existence.

Bottom line, we are now at a great awakening, when we must be brave and tear the veil off our own darkness to allow the light to cleanse the rusted contacts of our batteries so that we can function with ease not dis~ease. By facing and embracing our darkness, we can heal our relationship with good and bad and thus come to a place of balance. When we are balanced, we have no need to create the drama that allows us to act out the dysfunction of our dis~ease. When we are fearless, we have no need to invoke the dark realm to show us where the light is because the light is "on" for us...even when it's dark:) 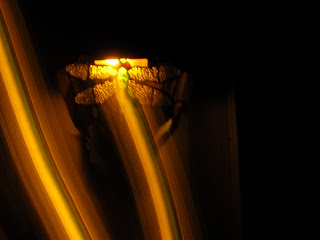 Posted by OrangeRay3 at 4:41 PM No comments: