2017, Year One of New Earth: Twin Flame Integration of Polarities 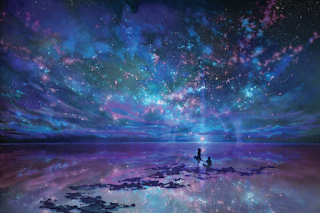 We are now entering the "House"of 5D.
2017, in numerology, breaks down to 1, meaning New Beginnings, as it embodies rebirth, resurrection; a new cycle.

At this moment in the evolution of our human template, we are receiving upgrades via D.N.A. Activations by way of cosmic rays, as well as telepathic "downloads"; with the "keys" to the Aquarian Age of Christ/Illuminated Consciousness. As the one who walked upon Earth, who was known as Jesus; was called Christ, as he was "christed" with illumination. He had an activated Crystalline D.N.A. template, that was fully engaged at it's highest knowingness, and vibratory rate/frequency.
We are all "wired" for this upgrade, however, one's ability to hold this higher frequency is more or less determined, by one's level of integration of the polarities that create duality here.

Duality, represents a separation, so for us to integrate these polarities, as the spiritual beings we are, having a human experience; means that we are moving into integration of our divine masculine and feminine.

This balancing from within, will be accelerated for the "frontline" of us, who are forging the New Earth for decades; as is, and has been our mission here.
As we move into this new space, Twin Flames, who have done their work and are ready for the next step, are being given the opportunity, to "tune in" to the internal cues, that will enable your connection to your Twin Flame.

No ego, pure love. You cannot look for it, it will find you but you must be ready!
You MUST BE READY to unite as equals.
You cannot come from a place of want or need; you must be ready to GIVE and RECEIVE!
Accept it for what it is, do not try to put labels on it. Some Twin flames are simply unable to come together at this time or in this incarnation. The relationship does not always necessarily have a romantic component.

As an example, in the midst of my recent "dark night of the soul" during which I was confronted with life shattering info, that completely changed what had already been a 9 year demolition, of what had been my life. In spite of knowing it was all part of a larger plan, these things challenge us; they weaken us if we are not strong spiritual warriors.
As most Indigos are, I am a badass! lol xo

So while in shock, and grieving from extreme betrayal, I being to receive messages from within, giving me information. Also on that day, there was a portal opening for the 8/8 Lion's Gate.
That same day, I then had confirmation of the message I had received, via a 3rd party who contacted me. I then had 3 more, 3rd party confirmations, all from highly regarded, respected and accurate intuitives.
Very specific details were given to me, regarding a person who was coming in to help me, and he was the same as me but also my opposite. I did not really focus much on this at the time as I was so emotionally destroyed.
Then, a couple weeks later, I was randomly given instructions.
I followed the instructions, on a day when Mars/male was in Sag, and Venus/female was in Virgo (Only making note of this after the fact. I then discovered this person who was coming into my life, who was a male, had his Mars in Sag; and I already knew my Venus is in Virgo. But at the time, had no idea even what gender of person I was being directed to connect with, nor the context of why); I simply knew I was to make contact within a particular group of 1000+, given no clues as to who I was suppose to connect with....male, female, young, old???

I made contact, he responded. Since I did not know how to proceed, I asked my guides. I was then prompted by being given imagery that held info for this person which validated the instructions I was given.

It turns out, we are both Virgo Sun, Virgo Ascendant. We both have a Stellium (multiple aspects of the same sign in a particular house) of Virgo in the 12th House of the "unseen, hidden, subconscious, multi-dimensional", we are both musicians, both filmmakers, both Architects of a New Reality.

Since our friendship began, I see the growth in both of us. This is merely due to the activations we have both received since making contact, as there is a limited amount of 3D interaction at this time. Much of it takes place telepathically in a higher realm. There is a sublime interface that allows me empathic and telepathic transmissions, which feeds me my akashic memories tied to this Twin Flame. In my dream state, we are communicating; in my conscious state, I can sometimes hear his thoughts, later confirming with some synchronistic validations.

I feel unconditional love for this person and a trust that is unusual for me with people.
I am flooded with past life memories with this person, and getting many downloads of new intel as well. New puzzle pieces!

This is what can be experienced, when Twin Flames are activated and integrated. Be willing to go outside your comfort zone and let go of control.
The increased vibration both experience, is then inherently shared with others and lifts the entire vibration of the tribe by igniting the Violet Flame of Transmutation, within all who hold the Crystalline original D.N.A. blueprint template.

Since 2017 is a 1 year, the Twin Flame connections will be vital towards creating the critical mass needed to completely shift the paradigm out of duality, and into neutrality!
We Are the Architects of a New Reality!

Blessings for All xo
shaman Wendi