Until now, like batteries, we have operated as a dualistic electro-magnetic polarity charge: Positive and Negative. We have been misinformed as to the purpose of negativity; upon release, it instigates positive; enabling action. To complete this level and move into the 12th Ray of Christ Consciousness; the Golden Ray of the Age of Aquarius and the Golden Age of Crystalline Consciousness, we must release all kharmic debt to resonate with the state of non duality. We are now in activation of our triple helix D.N.A. 12 strand template, allowing us to enter the portal into the 144 Grid Matrix of Divine Love. Now we MUST take this opportunity to relieve kharmic debt by confronting and releasing it's negative charge, so as to align yourself with the path towards transcendence over the old grid of duality...Move into the "Triality" or trinity as it is also known. We seek not a rebirth for to become a perpetual child is not pro-active. Accepting the Cause and Effect of our choices allows this "free will" dimension to be a wonderful experiment toward Unity. To engage here responsibly and effectively, we must first understand what this place is and the time is now. This is where we now find ourselves as a species, at the doorway to all that is...our multiverse and freedom like we've never known before!

Thought with Coherence is the Anchor; Love & Joy the reward; Forgiveness & Justice the final chapter in this collapsing 3D matrix grid.
"We are the Architects of a New Reality!"
I AM; OrangeRay xo 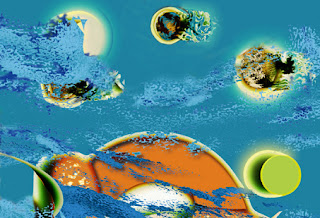 So if our physical structure becomes silicon based and silicon is less dense than carbon, this makes sense. When we consider that our soul is energy, an electrical current that in turn, animates this "husk" that our physical bodies are, our explorer pods; what we're really talking about is a telecast...or "Frankenstein". It would now reason that our soul could transmit its frequency and animate a holographic version of the physical body we show up in. Remember when "Beam me up Scotty" would materialize and dematerialize the crew off ship onto planets and to other dimensions/periods in Earth's history?
Our government is already using anti-matter devices covertly so this is no longer just in sci fi. Besides, I deduced long, long ago, that if a writer penned monsters or demons; if a film scenario exists; it's because somewhere in the dimensions, it does also exist and that writer or artist experienced it previously somewhere and yet consciously, it gets processed as a dream or vision; "I made it up".
Point taken: yes, we ARE a co-creative species. This IS a Co-Creative Universe and We ARE the Architects of a New Reality!
Posted by OrangeRay3 at 12:44 PM No comments: